How to Thaw and Prevent Frozen Water Pipes 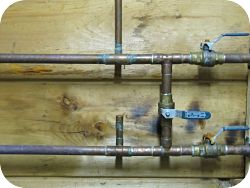 With temperatures this morning well below zero, we expect to be getting calls about frozen water pipes. It's not unusual after a bitterly cold night like we had last night for homeowners to turn on the water and see a trickle of water then nothing. If this happens to you, your pipes may be in danger of bursting and will need to be thawed. We've outlined steps below on how to thaw frozen pipes. If in doubt, we recommend calling a professional.

Frozen pipes are serious business. According to State Farm Insurance, over a quarter million American families experience damage to their homes each winter due to pipes that freeze and burst. Both copper and PVC pipes can burst.

Also, if you're like many Central New York homeowners who take a winter vacation or travel south to escape the cold, when you leave home there are steps you should take to prevent potential water damage to your home caused by frozen pipes. Those steps are described below, too.


If you’re planning to be away from home during winter remember to:

When you’re on vacation, what steps do you take to protect your home?